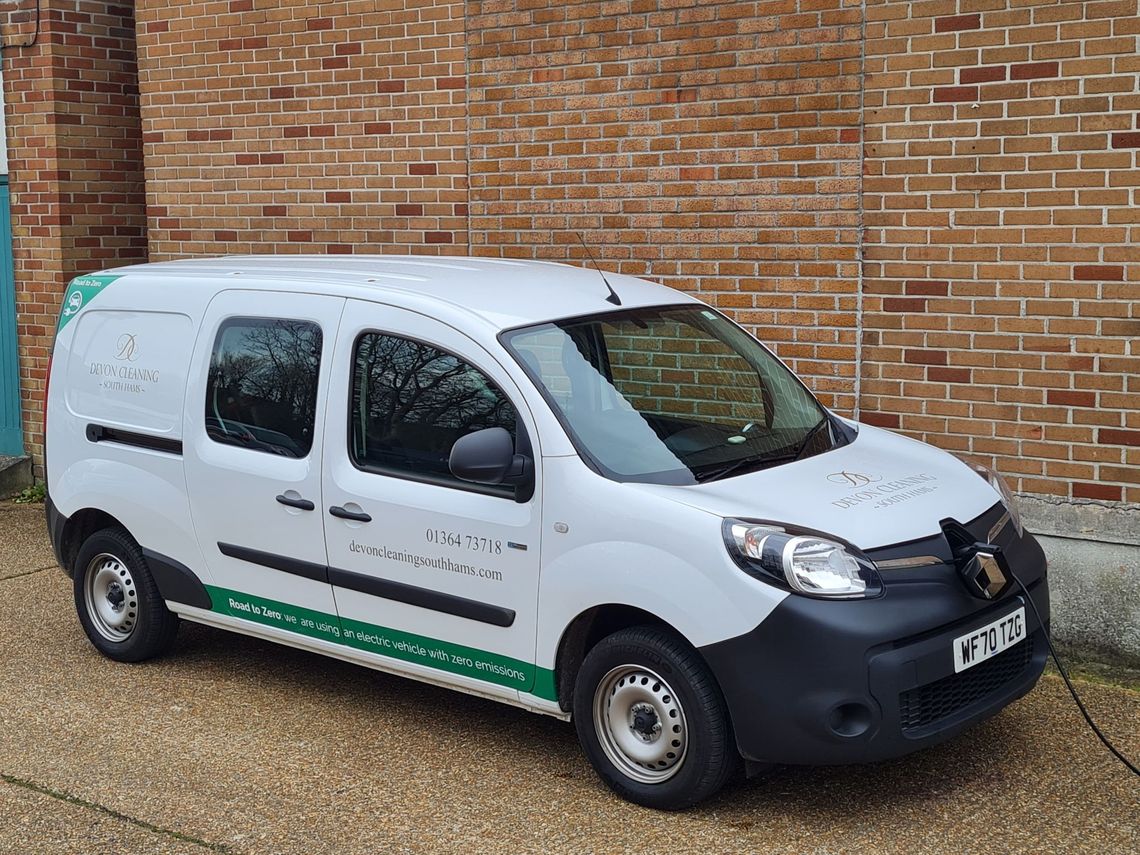 Devon Cleaning South Hams is on the road to zero emissions with the purchase of its first electric van. Owner Amanda Barnes is pushing ahead with her ambition to run an all-electric fleet for the company - which also includes

Plymouth-based Plymclean - despite being frustrated by the lack of charging points on a large council-owned industrial estate.

The two companies were merged last year following Amanda’s take-over of Plymclean, which is based on Plymouth City Business Park. She’s disappointed that Plymouth City Council has failed to install any charging points there and has no plans to do so in the near future.

Despite this, Amanda has gone ahead with the purchase of an electric Renault Kangoo van for Devon Cleaning South Hams, with a second on order for Plymclean. However, for the time being, she’s having to ask staff to charge the new vehicle at home, which is considerably more expensive than using a commercial charging point.

Amanda Barnes says, “It’s ridiculous that we can’t plug in at Plymouth City Business Park, for the simple reason that there isn’t a single charging point for over 60 businesses despite it being a council-owned site! It’s ambitious to have
purchased the new van for Devon Cleaning because our staff cover a lot of miles in a day but we’ve found a short-term solution - a client is letting us top up the battery using a 3-pin charger at their house. Asking our staff to charge
the van at home costs £8 for a two-hour charge, around twice as much as we reckon it would cost at commercial rates.”

The government has previously provided free charging points to businesses, but the company has been told funding for one isn’t currently available. Instead, Devon Cleaning is footing the bill to have a charging point installed at its unit in South Brent. Amada’s long-term aim is to swap out all nine vehicles in the company’s fleet for electric alternatives.

She adds, “We’re trying to go down a sustainable route and we seem to have these blocks in front of us. It’s actually costing us more at the moment than it would to fuel a normal vehicle. What’s the point in the government dishing out
grants to persuade businesses to go electric if there’s a lack of joined-up thinking with local authorities?”

Following the takeover of Plymclean last year, both businesses have continued to trade throughout the pandemic, retaining all employees and even taking on new staff in difficult circumstances. In addition, Devon Cleaning has recently enhanced its service portfolio and relaunched its website. The two brands hope that by transitioning to electric vehicles early it will put them in a stronger position to bid for sustainable contracts in the local area.

By the way, Amanda is purchasing both electric vans from Vospers in Plympton and has used local company Signs Express in Plymouth to print up the latest addition to the company’s fleet.

Editor’s Notes
The Road to Zero outlines the government’s strategy to transition to zero emission road transport ‘effectively’ by 2040, using a combination of measures including grants, subsidies and fiscal incentives to encourage uptake of the cleanest vehicles.

© 2021. Thomson Directories Ltd. The content of this website is owned by us and our licensors; copying of any content (including images) without our consent is in breach of our T&Cs |All rights Reserved